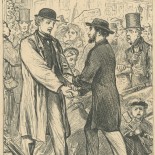 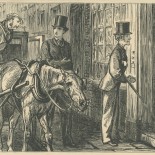 Music on the Water

A Client for Mr Pedoift

The End of the Elopement

Miss Gwilt and the Gorgons

My Brothers the Dogs

Thanks to the Thunder

The Sop to Cerberus

The Moth and the Candle

Wilkie (William) Collins was born on the 08th of January 1824 at 11 New Cavendish Street, St. Marylebone, Middlesex, and died on the 23rd of September 1889 in Wimpole Street, London. The successful author wrote popular, so-called ‘sensation novels’ such as The Woman in White, which was first serialised in Charles Dickens’ magazine All Year Round 1859-60 and then published in book-form in 1860, and The Moonstone which was also at first issued in instalments in All Year Round before being sold in book-form (1868).

Armadale was initially serialised in the Cornhill Magazine between November 1864 and June 1866 before being available in the bookshops. Collins received a generous commission of £5,000 for his story from the proprietor of Cornhill Magazine, George Murray Smith (1824-1901). The Illustrator, painter and wood-engraver George Housman Thomas (1824-1868) created the illustrations.

In the German spa town of Wildbad, the ‘Scotchman’ Mr. Neal is asked to transcribe the deathbed confession of Allan Armadale; his story concerns his murder of the man he had disinherited (also called Allan Armadale), who had subsequently married the woman he was betrothed to under false pretensions. Under Allan’s instructions, the confession is left to be opened by his son once he comes of age.

Nineteen years later, the son of the murdered man, also Allan Armadale, rescues a man of his own age—Ozias Midwinter. The stranger reveals himself to Reverend Decimus Brock, a friend of Allan through his late mother, as another Allan Armadale (the son of the man who committed the murder). Ozias tells Brock of his desperate upbringing, having run away from his mother and stepfather (Mr. Neal). The Reverend promises not to disclose their relation to one another, and the young men become close companions. Ozias remains haunted by a fear that he will harm Allan as a result of their proximity, a fate warned of in his father’s letter; this feeling intensifies when the pair spend a night on a shipwreck off the Isle of Man—as it turns out, the very ship on which the murder was committed. Also on the vessel, Allan has a mysterious dream involving three characters; Ozias believes that the events are prophesy of the future.

Three members of Allan’s family die in mysterious circumstances, one of which was instigated in the rescue of a woman who attempted to commit suicide by drowning. As a result, Allan inherits the estate of Thorpe-Ambrose in Norfolk and relocates there with Ozias, intending to make him steward. Once there he falls in love with Eleanor (Neelie) Milroy, the sixteen-year-old daughter of Major Milroy, to whom he has rented a cottage. During this time, correspondence takes place between Maria Oldershaw and Lydia Gwilt concerning the latter’s ambitions to marry Allan as a means of achieving retribution for his family’s apparent wrongdoings (she was originally a maid in the service of his mother).

Lydia, who is thirty-five but looks twenty-something, is the villain of the novel and her colourful portrayal takes up much of the rest of the story. Originally Allan’s mother’s maid, and a contributor to the conflict between Allan’s and Ozias’s fathers, she is a fortune-hunter and, it turns out, a murderess. Unable to alienate Allan’s affections from Miss Milroy, she settles for marrying Midwinter, having discovered his name is the same. She plots to murder Allan—or to have him killed by her ex-husband, a Cuban desperado—and, since she is now “Mrs. Armadale,” to impersonate his widow. Allan escapes the desperado’s attempt on his life—he is supposed to have drowned in a shipwreck—and returns to England. Lydia’s plans are thus foiled. Her last shot is to murder Allan herself—the weapon being poison gas, the scene being a sanatorium run by a quack called Doctor Downward—but she is thwarted by her own conscience. Midwinter and Allan have switched rooms, and she can’t bring herself to murder her true husband, for whom she does have genuine feelings of love. After rescuing Midwinter and writing him a farewell note, she goes into the air-poisoned room and kills herself. Allan marries Miss Milroy; Midwinter, still his best friend, becomes a writer.

The image titles are taken from the Armadale publications available on Internet Archive.