Women Artists and the RA – “A somewhat chequered History”

These days we take it for granted that women artists are members of the Royal Academy of Arts, attend and teach at the RA Schools and/or exhibit at the annual Summer Exhibition. But this was not always the case. This brief introduction, and the following short biographies, will give you a quick overview of the changes the RA underwent before it allowed both male and female artist to take advantage of all the facilities and courses it has on offer.

According to their website, the Royal Academy of Arts (RA) in London has a “somewhat chequered history when it comes to the equality of the sexes.” This “chequered history” already begins with the very foundation of the RA in 1768. Although the Instrument of Foundation, the document laying out the basic terms of the Academy, as signed by George III on the 10th December that year, states that “[…] Academicians of the Royal Academy they shall all of them be Artists by Profession at the Time of their Admission, that is to say Painters, Sculptors, or Architects Men of fair moral Characters […]”, two women were named in the list of founding members that followed the above statement.

Angelica Kauffman (1741-1807) was an internationally established portrait and history painter. She had just been a resident of London for over two years at the time of the foundation, but was friends with the first president of the RA, Joshua Reynolds (1723-92), and had portrayed members of the British aristocracy such as Augusta the Duchess of Brunswick-Wolfenbüttel, the King’s sister. It was probably thought wise to include an artist of such high reputation and popularity no matter what the gender. The other female founding member was Mary Moser (1744-1819), a flower painter. In adding her to the original members’ list, the rules of the Instrument of Foundation were also broken with regard to the minimum age limit of 25; Moser had just turned 24 in October 1768. However skilled she was in her art (she had already won prizes as a teenager) it could be assumed that her inclusion was helped by the fact that her father, the chaser and enameller George Michael Moser (1706-83), had been one of the petitioners to the King to patronize an academy of the arts.

Although Angelica Kauffman and Mary Moser were members, they were not expected to take an active part in the running of the RA; male artists took any positions such as lecturers or that of the treasurer or secretary. It was also unheard of and seen as utterly inappropriate for women to take part in life classes, which, by definition, were and still are at the very core of the study of art. Hence, Johan Joseph Zoffany’s (1733-1810) painting The Portraits of the Academicians of the Royal Academy (1771-72) only includes tiny portraits of Kauffman and Moser; the setting is a life drawing class which the women would not have been permitted to attend. However, women were not excluded from the Annual Exhibition (now known as the Summer Exhibition); The Instrument of Foundation states that “[t]here shall be an Annual Exhibition of Paintings Sculptures & Designs, which shall be open to all Artists […]; so a small number of female artists would show their work among that of their male competitors. All in all, the Instrument of Foundation makes it very clear that women artists were not generally considered to become RA members. The pronoun ‘she’ doesn’t occur at all in the whole document. As can be imagined, not all women artists were content with this arrangement and, over the centuries, they tried to change the RA’s attitude and to allow females to become members and to attend the Royal Academy Schools (founded 1769). Only in 1879, under the pressure of the General Assembly, did the Council grudgingly decided to grant women membership, with restricted privileges.

The School of Art has some works of these early movers and shakers in its collection, and a selection of them is on display at the School of Art 08th March to 17th March 2017. 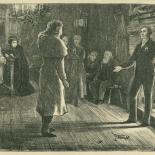 Far From the Madding Crowd: ‘Troy next advanced into the middle of the room, took off his cap –‘, illustration from chapter 53 of Thomas Hardy’s ‘Far from the Madding Crowd’, Cornhill Magazine Vol.30, 1874, Helen Allingham wood engraving mounted on grey card 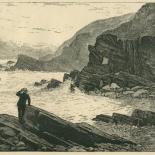 A precocious child, she was taught by her father the artist Joseph Johann Kauffmann (1707-1782) with whom she travelled through Austria and Italy, visiting both Venice and Florence in the latter. From 1763 she was based in Rome where she attended Johann Winckelmann’s (1717-1768) classes in perspective. In 1766 she moved to London and became a founder member of the Royal Academy and a close friend of Sir Joshua Reynolds. Kauffman created four ceiling paintings for the RA’s new home, Somerset House, in 1780.She married Antonio Zucchi (1726-1795) in 1781 and together they moved to Rome where Kauffmann established a salon. She was one of the first women to achieve an international reputation as an artist. She painted portraits and historical subjects in a neo-classical style but also undertook decorative work for the architect Robert Adam (1728-1792). As a woman she was forbidden to take part in life classes, however, according to fellow RA member, the sculptor Joseph Nollekens (1837-1823), she also drew from the life model. Nollekens’ biographer, J. S. Smith interviewed a former life model of the Royal Academy, a Mr Charles Cranmer, who confirmed that he had sat for Kauffman at her house in Golden Square, London, albeit only exposing legs, arms and shoulders; her father was also in attendance during these sessions for the sake of propriety. She would have also learnt anatomy from nude drawings created by male artists and classical sculptures.  Fellow artist Joseph Bonomi (1739-1808) received a letter from Rome in 1807 describing her final illness and funeral in detail. Benjamin West read out the translation of that letter to the RA’s General Assembly on The 23rd December 1807, and a copy of the document was included in the academy records. This event shows that Kauffman, although a woman artist, was highly respected by her male peers.

Bridell-Fox was the daughter of a Unitarian minister. She studied at Henry Sass’s School of Art, 1843-46. She pursued a career in the arts and was keen to improve educational opportunities for women. She became friends with artist and women’s rights activist Barbara Bodichon (1827-91). Bodichon organized a petition addressed to the Royal Academy in 1859 pleading for admittance of female students; Bridell-Fox signed that petition. She and her father had already set up a sketching group in 1848, where women, under the guidance of a professional teacher, drew from an undraped model, an activity that existing art schools did not allow. She occasionally tutored there until 1858. Bridell-Fox joined the Society of Female Artists in 1857 and exhibited with them until 1870. She took a painting tour of Germany and Italy from 1858-63, where she met her husband Frederick Lee Bridell (1830-1863), also a promising artist. At this time she began painting historical and genre subjects, but is better known for her portraits and colourful paintings of Arab life and landscapes made later in her career. Scenes of Algiers were her inspirations for the latter. Bodichon, who owned a house in Algiers, had invited her friend to stay there to get over the loss of her husband and that of her good friend, the author Elizabeth Gaskell (1810-65).

Allingham was the daughter of a rural physician and niece of Laura Herford (1831-70). Like Bridell-Fox, Herford had signed the petition to the RA in 1859 to allow women and was the first female artist to be admitted to the RA Schools in 1860. After her father’s death in 1862, Allingham’s family settled in Birmingham. She studied at the Birmingham School of Design under Rainbach, the Female School of Art in London, from 1867, and then the Royal Academy Schools from 1868 until 1872. However, she attended the school less and less from 1870 onwards as she felt that the tuition was insufficient. She began her career illustrating Once a Week magazine, then worked as a children’s book illustrator. In 1869 she was one of the founders of The Graphic, a new large-scale, high-quality illustrated weekly magazine. She illustrated the Thomas Hardy’s serialised novel Far From the Madding Crowd in 1872 for Cornhill Magazine and in 1875 Annie Thackery’s novel Miss Angel for the same magazine. After her marriage to renowned poet of the Rossetti circle, William Allingham (1824-89), she turned to watercolour, becoming the first woman to achieve full Royal Watercolour Society status in 1890. Her work is centred on quaint scenes of rural life in the rustic English countryside, which were very popular until the outbreak of WWI; afterwards, they were seen as old-fashioned and out-dated.

Dame Laura was the wife of the artist Harold Knight (1874-1961). She studied at Nottingham School of Art, 1889-94. She lived in the artist colonies Newlyn, 1908-18, and Laren, Holland, before settling in London. After her friend, the artist Alfred James Munnings (1878-1959) whom she had met in Newlyn, had put her name forward a few times without success, she was finally made an associate of the Royal Academy in 1927; she was the second female associate after Annie Swynnerton (1844-1933). In 1936 she became the first woman to be elected a full member of the Royal Academy since Angelica Kauffmann (1741-1807) and Mary Moser (1744-1819) in 1768. She was also on the selection and hanging committee. She worked as an Official War Artist during the Second World War, work that included studies made at the Nuremberg trials in 1946. Knight painted portraits and landscapes but is perhaps best known for her scenes of the ballet, circus and of gypsy life. Her first autobiography Oil Paint and Grease Paint was published in 1936 followed later by The Magic of Line in 1965. She was made a Dame Commander of the British Empire in 1929. A retrospective exhibition of her long career was staged at the Royal Academy in the summer of 1965. She was married to fellow painter Harold Knight (1874-1961) whom she had already met as a teenager at Nottingham School of Art. He was elected a Royal Academician in 1937. Knight was also present, discussing one of her works with fellow artists, when in 1913 a group of suffragettes caused mayhem at the Royal Academy galleries. Some of them tried to start a fire in the ladies’ restroom whereas two others attacked a portrait of author Henry James (1843-1916) by John Singer Sargent (1856-1925) and George Clausen’s (1852-1944) Primavera. The suffragettes must have seen the Royal Academy as a bastion of patriarchy that needed taking down a peg or two.

Hermes was the wife of wood engraver Blair Hughes-Stanton (1902-1981). She studied at Beckenham School of Art, 1920-21, before attending the Brook Green School of Art run by Leon Underwood (1890-1975), 1921-25, where she met her future husband Hughes-Stanton. She was awarded a Prix de Rome for engraving in 1925. In 1931, she and Hughes-Stanton moved to Wales to work for the Gregynog Press founded by art patrons Margaret (1884-1963) and Gwendoline Davies (1882-1951). During the Second World War she undertook war work in Canada, 1940-45. On her return she re-occupied teaching posts in drawing and printmaking at St Martin’s and Camberwell Schools of Art and then later taught at the Central School of Art and Design and, from 1966, at the Royal Academy Schools. She was a founder member of ‘The Islanders’ group and was elected associate of the Royal Academy in 1963 before becoming a full member in 1971. She produced wood engravings and linocuts but also designed glass panels for the British Pavilions at the 1937 Paris and 1939 New York World Fairs. A retrospective exhibition, among others, was held at the Royal Academy in 1981; the same year, she was appointed OBE.