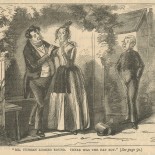 “Mr. Tupman looked round. There was the fat boy.”

“Mr. Pickwick….went slowly and gravely down the slide, with his feet about a yard and a quarter apart, amidst the gratified shouts of all the spectators.”

“Mr. Snodgrass and Mr. Winkle had each performed a compulsory summerset with remarkable agility?.”

“The words were scarcely out of the old gentleman’s lips, when footsteps were heard ascending the stairs.”

“The door was just going to be closed in consequence, when an inquisitive boarder, who had been peeping between the hinges, set up a fearful screaming.”

“Old Mr. Wardle, with a highly-inflamed countenance, was grasping the hand of a strange gentleman.”

“Sam stole a look at the inquirer.”

“Old Lobbs gave it one tug, and open it flew, disclosing Nathaniel Pipkin standing bolt upright inside, and shaking with apprehension from head to foot.”

“Standing before the dressing-g;lass was a middle-aged lady in yellow curl-papers, busily engaged in brushing what ladies call their ‘back hair’.”

“Mr. Pickwick no sooner put on his spectacles, than he at once recognised in the future Mrs. Magnus the lady into whose room he had so unwarrantably intruded on the previous night.”

“Before Mr. Pickwick distinctly knew what was the matter, he was surrounded by the whole body, and kissed by every one of them.”

“Sam looked at the Fat Boy with great astonishment, but without saying a word.”

Frontispiece for chapter 1 ‘The Pickwickians’

“He has come out,” said little Mr. Perker, greatly excited; the more so as their position did not enable them to see what was going forward.

“Heyling!” said the old man wildly. “My boy, Heyling, my dear boy, look, look!” Gasping for breath, the miserable father pointed to the spot where the young man was struggling for life.

“Mr. Weller was dispelling all the feverish remains of the previous evening’s conviviality, . . . . when he was attracted by the appearance of a young fellow in mulberry-coloured livery.”

“A compliment which Mr. Weller returned by knocking him down out of hand: having previously with the utmost consideration, knocked down a chairman for him to lie upon.”

“There was a scream as of an individual — not a rook — in corporeal anguish. Mr. Tupman had saved the lives of innumerable unoffending birds by receiving a portion of the charge in his left arm.”

“I say insolent familiarity, Sir,” said Mr. Pickwick, turning upon Fogg with a fierceness of gesture which caused that person to retreat towards the door with great expedition.”

“Who are you, you rascal?” said the captain, administering several pokes to Mr. Pickwick’s body with the thick stick. “What’s your name?”

“Take this little villain away”, said the agonised Mr. Pickwick.

“The heroic man actually threw himself into a paralytic attitude, confidently supposed by the two bystanders to have been intended as a posture of self-defence.”

“The Kitchen door opened, and in walker Mr. Job Trotter.”

“The mottled-faced gentleman reviewed the company, and slowly lifted his hand.”

“The horse no sooner beheld Mr. Pickwick advancing with the chaise whip in his hand.”

“Sam, having been formally introduced . . . . as the offspring of Mr. Weller, of the Belle Savage, was treated with marked distinction.”

“God bless me, what’s the matter?”

“Seated on an upright tombstone, close to him, was a strange unearthly figure.”

“The chair was an ugly old gentleman; and what was more, he was winking at Tom Smart.”

Browne did not finish his apprenticeship at Finden’s – he was, apparently, tired of simply copying the works of others – and instead set up a studio with Robert Young at 3 Furnival’s Inn, Holborn, London, in 1834. Young had just finished his apprenticeship at Finden’s and would often turn Browne’s designs into prints after the illustrator had transferred his drawings onto metal. They collaborated on many commissions and stayed friends until Browne’s death in 1882.

In 1836, Charles Dickens (1812-70) recommended Browne as the successor to Robert Seymour (1798-1836), who had committed suicide, and Robert William Buss (1804-1875), whose work Dickens was not satisfied with, as the illustrator for his Pickwick Papers. There had been quite a competition to illustrate the novel, and John Leech (1817-64), who was to become most well-known for his designs for Punch, received a refusal letter from the author saying that “the plates for the Pickwick Papers are in the hands of a gentleman of very great ability, with whose designs I am exceedingly well satisfied, and from whom I feel it neither my wish nor my interest to part.” The author William Makepeace Thackeray had been another candidate; he generously congratulated his competitor for receiving the commission. The collaboration between Browne and Dickens lasted more than two decades.

The Pickwick Papers describes the travels of members of the Pickwick Club, namely Messrs. Pickwick, Winkle, Snodgrass and Tupman, across the country. They are really amateur scientists, observers of human nature, and interested in all and everything that those whom they encounter care to tell them about. Essentially good-hearted and generous gentlemen who see themselves as men of the world, they are not exactly streetwise and often get into predicaments. Luckily, more often than not, Mr Pickwick’s servant Sam Weller, a pragmatic young man who grew up on the streets of London, manages to rescue them from further trouble.

Browne used the pseudonym NEMO (‘no one’) for the first images he created for The Pickwick Papers, but had changed it to Phiz by the third plate. He thought that it would work better with Dickens’ nom de plume Boz. ‘Phiz’ is also another word for ‘facial expression’. It is sometimes interpreted as an abbreviation for ‘physiognomy’, too. Browne had the skill to convert Dickens’ descriptions of his protagonists into humorous and lively drawings. However, the designs of the 1836 edition don’t always correspond exactly with the text, as the author would often explain a scene to Browne before putting the final version to paper. There would often be not enough time before publication of a chapter for any adjustments.

Phiz’s illustrations for the original edition of the novel have much in common with the caricatures of William Hogarth (1697-1764) and Isaac (1764-1811) and George Cruikshank (1792-1878). They are quite raucous and cheeky and the characters’ features are comical, even those of supposedly pretty ladies. For the 1873/4 version in Household Words, Browne revised his earlier images; some were discarded altogether and new ones created. The result appears comparatively sanitized, expressions are less farcical, crowds less wild and flirting couples have an ever so slightly more appropriate distance between them. It is likely that Browne changed his earlier creations to suit the prevailing taste for prim and realistic, rather than satirical, depictions. A good example is an image for chapter XI in which Mr Pickwick and his friends attend an election at the borough of Eatonswill: the 1836 image shows a rowdy crowd; they are fighting each other, and many of them are so drunk that they can’t keep on their feet. None but some gentlemen on the balcony pay any attention to the mayor’s speech. In the new election a picture, an orderly group of people cheers one of the candidates whilst he wins votes by kissing the infants of dapper young mothers. The scene under the mistletoe at the Christmas party has also been altered: whereas Pickwick is just about to kiss the old matron of the house, surrounded by canoodling couples, in the initial illustration, the new version shows the same gentleman surrounded by lovely young ladies about to kiss him under the mistletoe. This setting, the fatherly figure being teased by younger women, might have seemed more appropriate to a mid-Victorian audience.

The production process of the images had also changed from steel engraving to wood engraving; hence, he needed to adapt his drawings to the new medium as well. The looser drawing style of the redrafts might also have been stemmed from a partial paralysis of the right arm and the loss of the proper use of his right thumb, which obliged him to hold his pencil between his middle- and forefinger. He had, so he said, slept with an open window at the seaside in 1867, which had caused his illness and subsequent handicap. However, the paralysis might have also been caused by a stroke according to Robert L. Patten and Valerie Browne Lester.

Apart from The Pickwick Papers, Browne illustrated the following of Dickens’ novels:

Dickens, Charles. The Posthumous Papers of the Pickwick Club. London: Oxford UP, 1971. Print.

Kitton, Fred G. “Phiz” (Hablot Knight Browne) A Memoir including a Selection of his Correspondence and Notes on his Principal Works. London: Satchell & Co., 1882. Print.