According to George F. MacDonald, the Haida people probably arrived on Haida Gwaii (formerly Queen Charlotte Islands), a large archipelago consisting of more than 150 islands off the coast of British Columbia, Canada, at the end of the last ice age (ca. 11,700 years ago). As there were plenty of natural resources available, he expounds, they had no difficulties settling and had time to develop their arts and crafts. As the French explorer Étienne Marchand (1755-93) noted in 1791:“[…] architecture, sculpture, painting, and music are found united.”

The first recorded contact between the Haida and the ‘Western world’ occurred when the Spanish explorer Juan Perez (1725-75) sailed up the coast of British Columbia in 1774. Captain James Cook (1728-79) also visited the islands during what was to be his last voyage in 1778, and Captain George Dixon (ca. 1748-95) landed on the islands in 1787. He named them the Queen Charlotte Islands after the spouse of Britain’s King George III (1738-1820) and, incidentally, the name of his ship. Dixon traded sea otter pelts with the Haida, a very sought-after commodity. In fact, sea otter fur was so popular that they were nearly extinct in that part of the world by the early 19th century.

Tragically, not only the sea otter population suffered; as is so often the case, the strangers brought devastating diseases such as smallpox and measles, which decimated the number of Haida people from thousands to a few hundred within less than 100 years. By 1915, there were fewer than 600 of them left, living mainly in the villages of Skidegate and Old Masset on Graham Island. Today, most of their ancestors still live in these two villages or in Prince Rupert, the nearest city. The Council of the Haida Nation, which was formed in 1974, represents them. 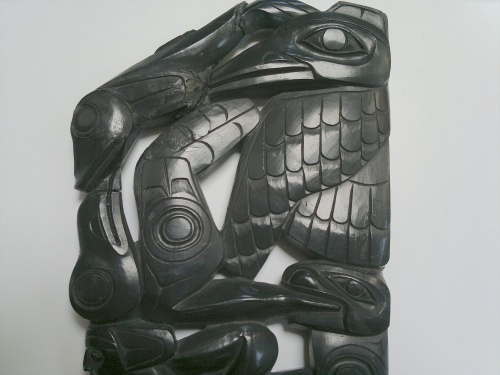 Argillite (kwawhlahl in Haida) is a dense but fragile, black, carbonaceous shale; the specific type that the Haida use, can only be found at Slatechuck Creek (Tllgaduu randlaay) on Graham Island; it is free of quartz or feldspar, which makes it unique and hence, valuable. In 1941 the Haida officially received the exclusive rights to the quarry. A clip I discovered on YouTube, about the contemporary argillite carver Lionel Samuels, shows an apprentice carefully sawing through a block of argillite in order not to break it. The basic shape is usually worked out with woodwork tools and the details are carved with specifically designed gravers and knives. Whereas carvers liked to leave the carving marks on earlier pieces, in the late 19th century, they started smoothing and polishing the surface to give the black colour its lustre.

Argillite carvings were probably first produced by the Haida around 1800, some sources say in the 1820s. Especially after the trade with sea otter pelts came to a standstill in the 1830s, pipes such as our ‘curiosity’ became an important source of income; traders and sailors appreciated them as souvenirs. The Haida used tobacco for funeral rituals; they believed that the smoke from the pipes would carry souls and prayers to the sky world that formed part of the cycle of reincarnation they believed in. However, for consumption it was rather chewed than smoked. The pipes intended for sale rather than ceremonies developed into ‘panel pipes’ and lost their function; only holes on the top and the side still hint at their original purpose. The Haida carved figures from their mythology, including, for example, the raven and the eagle, but also incorporated European imagery to make the objects even more appealing to their customers. In time, they would also produce other art wares such as platters or miniature totem poles. Initially, it was not common for carvers to mark their works but some, for example Charles Edenshaw (1839-1920), Tom Price (1857-1927), John Robson (1846-1924) and John Cross (1867-1939), were very well known. 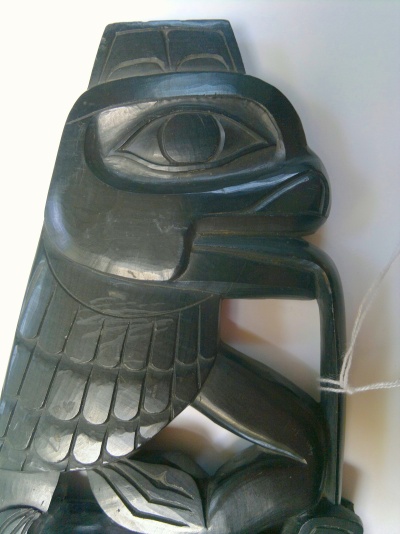 The raven and the eagle, both included in the design of our panel pipe, hark back to the two family lines, or moieties, of the Haida, the Ravens and the Eagles. The Ravens are subdivided further into 22 families and the Eagles into 23. Marianne Boelscher goes into more detail about the mythology surrounding the origin of these lineages in her book, which is listed in the sources section below. The Raven, MacDonald explains,“is truly a trickster who liberates humankind from a clamshell, then in one story sets the universe in order, only to threaten it with chaos in the next. The Raven is the most greedy, mischievous and lecherous creature imaginable, but almost without meaning to, teaches humans the art of living a good life.”

There used to be hundreds of stories about the Raven alone, but sadly there is nobody alive anymore these days who has comprehensive knowledge of Haida myths and legends. Without extensive information, it is difficult to decide the meaning of the decoration of our collection’s pipe. I would venture that the figures at the ends are the Raven and the Eagle respectively. The figures in the middle are a human and possibly a Grizzly bear. The animal next to the Raven, unfortunately broken off, is a fish. The Haida depicted fish such as dogfish, halibut, starfish, skate and sculpin. Another bird of prey and what is possibly another Raven complete the design. As far as I understand, the smaller figures attached to the larger crests refer to specific myths regarding the Raven and Eagle. 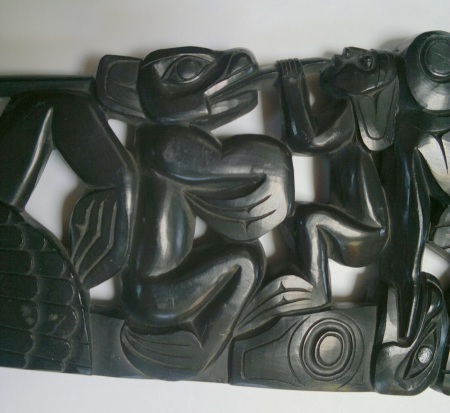 Architect Sidney Kyffin Greenslade (1866-1955), ‘Consulting Curator’ for the university’s Arts and Crafts Museum, bought the pipe, together with other objects, at A. Stear, Exeter, in September 1925. Stear had purchased the items at an auction; they had been part of the ‘Garnham Collection’. Unfortunately, I could not find out about the background of that collection. In the University College of Wales’ annual report to the Court of Governors in 1925, the panel pipe is described as “a remarkably designed pipe in black polished shale with totemic carvings from the Queen Charlotte Islands, quite equal to the very fine example in the British Museum.”