The School of Art has closed its gallery spaces for the foreseeable future following government recommendations.

The health and safety of our visitors and staff is paramount.

We will publish our re-opening dates on our websites and social media accounts.

Please look after yourselves and each other. 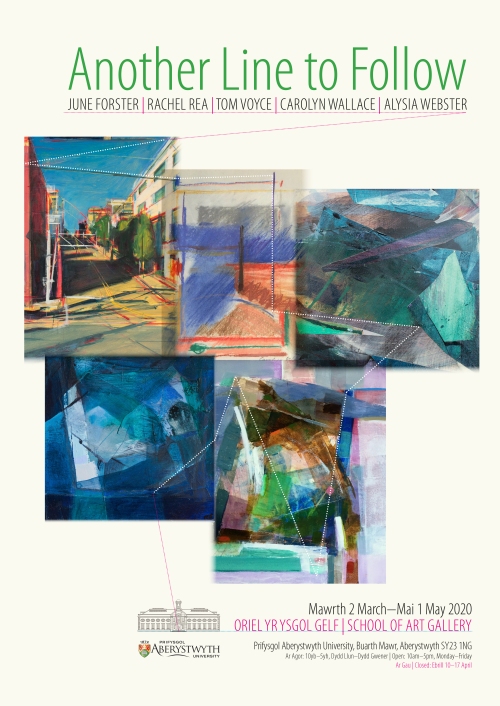 Another Line to Follow celebrates the ongoing friendship and collaboration between artists who share a common thread through their interest in abstraction and who are connected to Aberystwyth University, having met whilst either teaching or studying art. The idea of ‘following lines’ emerged as a challenge to see if it would be possible to make a direct response to each other’s artwork.

Each line began with a starting point of either a drawing, a postcard communication or a finished artwork and a series of responses evolved. However, no two lines begin in the same way. For instance, there is the line that traces how one artist developed ink and graphite studies made on location in Scotland through to a finished studio painting, with the inclusion of responses made to the various stages along the way. Another line began with each artist having the restriction of selecting just six colours from a limited range and then making compositions following an exchange of their chosen colour palette.

As it unfolded, the project highlighted the complexity of the response mechanism and several observations were made, including that the initial responses to a small sketch made outdoors at Nant-y-moch reservoir were all collages. In other lines, too, collage plays a part. Arguably, it could be that collage offers an accessible route into the process, allowing for elaboration of the initial image through the incorporation of colour and texture by using minimal means, and in doing so might liberate the imagination for the creation of further images.

From the outset, the aims included providing an insight into the creative process and to demonstrate how series of work can be produced from the slightest of starting points. It is hoped that the exhibition inspires current students to understand that communication and collaboration go on beyond art school. As the participants discovered through their exchanges of artwork and discussions on the image-making process, there is indeed always another line to follow!

Carolyn Wallace attended the Royal College of Art, 1967-1970, and eventually settled in Wales. She was visiting tutor at the Elisabeth Frink School of Figurative Sculpture and taught Continuing Education art classes from her studio in Ystrad Meurig, attended by June Forster. Carolyn has work in the Contemporary Art Society for Wales and has exhibited most recently with Tom Voyce and June Forster at ‘Teaching Painting: Fully Awake 5.6’ in London, that looked at the impact of intergenerational art teaching.

June Forster trained at the School of Art, Aberystwyth, and began teaching there at the start of her PhD Fine Art studies in 2007. As tutor in drawing and painting she met Rachel Rea, Tom Voyce and Alysia Webster during their first-year studies and later collaborated on a postcard exchange with Tom during his MA. Since finishing the PhD in 2014, she continues to explore her interests in aspects of landscape experience and colour interaction. She has exhibited widely since 2005 and has work in the ‘Paintings in Hospitals’ collection.

Rachel Rea was awarded a first-class BA Fine Art and English Literature in 2016 and MA Fine Art (Distinction) in 2018 from Aberystwyth University. She works from her studio in Borth, exhibiting in gallery and group shows in various parts of the UK and her paintings feature in many private collections.

Tom Voyce studied at the School of Art and was awarded a first-class BA Fine Art (2012) and MA Fine Art (Distinction) in 2014. Tom went on to qualify as a teacher and continued to paint, and in 2017 won Sky Arts ‘Landscape Artist of the Year’. He has subsequently travelled all over the world teaching workshops and exhibiting and is represented by several galleries in the UK and New Zealand.

Alysia Webster was awarded a first-class BA Fine Art in 2016 and MA (Distinction) in 2018 from Aberystwyth University. She paints from her studio in Yorkshire, exhibits widely, and has work in many private collections. Her work featured in The Graduate Art Prize, London, in 2017 and she is represented by ARTIQ.