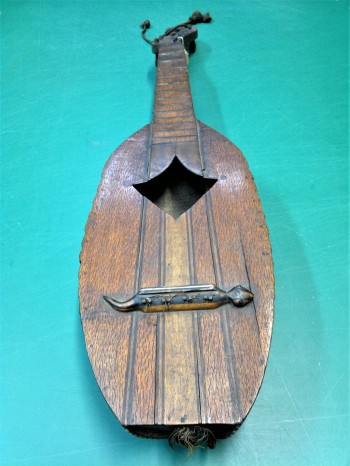 Country of origin: South America (most likely Peru or Bolivia)

The charango is a small string instrument belonging to the lute family. It is a typical and popular instrument in the Andes of Bolivia, Chile, Ecuador, Peru and parts of Argentina. It most likely derives from the early guitars that the Europeans, especially the Spanish conquistadors, brought with them from the 16th century onwards. Before, indigenous instruments included the panpipe, notched flutes and double-headed drums but not strings. With its high pitch and smaller size than a guitar, the charango is more in line with the musical aesthetics of the indigenous people and can be carried around more easily. END_OF_DOCUMENT_TOKEN_TO_BE_REPLACED 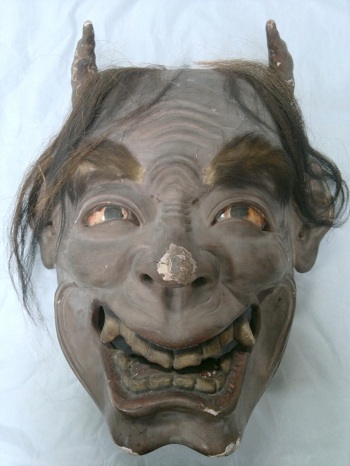 Noh is the name of the classical Japanese form of theatre. It developed from the earlier performance styles Dengaku no Noh (field music performance) and Sarugaku (“monkey music”) during the 14th century. During Dengaku, there would be acrobatics and juggling; Sarugaku had comical components and had developed from Shinto rituals. Whereas Dengaku performers would alternate the singing and the more physical parts of their show, Sarugaku actors sung and danced/mimed simultaneously; after 1420, they would also be supported by a choir. Sarugaku also became more serious over the decades and began to supplant Dengaku in the second half of the 14th century. Father and son Kan’ami Kiyosugu (1333-84) and Zeami Motokiyo (1363-1443) were famous actors of their time and are chiefly responsible for outlining the rules and conventions of the austere, dramatic art of Noh, which are still being adhered to today. Zeami explains, for example, that “the writing of No consists of three stages: choice of “seed” (subject), construction and composition. The “seed” is the story on which the play is based. This story must be well considered and divided into Introduction, Development and Climax. …Then the words must be put together and the music joined to them.” (The No Plays of Japan, Arthur Waley) END_OF_DOCUMENT_TOKEN_TO_BE_REPLACED

END_OF_DOCUMENT_TOKEN_TO_BE_REPLACED

2017 is the ‘Year of Legends’ in Wales, and we delved deeply into our collection to see what treasures relating to this fabulous theme might come to light. We selected a few, some of which will be included in a small display at the School of Art; others will only be viewable online. This is an on-going project and from time to time we might add to this post, so keep an eye out for updates.

END_OF_DOCUMENT_TOKEN_TO_BE_REPLACED

“There was a scream as of an individual — not a rook — in corporeal anguish. Mr. Tupman had saved the lives of innumerable unoffending birds by receiving a portion of the charge in his left arm.”

“The words were scarcely out of the old gentleman’s lips, when footsteps were heard ascending the stairs.”

“The door was just going to be closed in consequence, when an inquisitive boarder, who had been peeping between the hinges, set up a fearful screaming.”

“Mr. Pickwick….went slowly and gravely down the slide, with his feet about a yard and a quarter apart, amidst the gratified shouts of all the spectators.”

“Who are you, you rascal?” said the captain, administering several pokes to Mr. Pickwick’s body with the thick stick. “What’s your name?”

“Mr. Pickwick no sooner put on his spectacles, than he at once recognised in the future Mrs. Magnus the lady into whose room he had so unwarrantably intruded on the previous night.”

“A compliment which Mr. Weller returned by knocking him down out of hand: having previously with the utmost consideration, knocked down a chairman for him to lie upon.”

“Seated on an upright tombstone, close to him, was a strange unearthly figure.”

“Sam stole a look at the inquirer.”

“The mottled-faced gentleman reviewed the company, and slowly lifted his hand.”

“Old Mr. Wardle, with a highly-inflamed countenance, was grasping the hand of a strange gentleman.”

“Take this little villain away”, said the agonised Mr. Pickwick.

“God bless me, what’s the matter?”

“The chair was an ugly old gentleman; and what was more, he was winking at Tom Smart.”

“Old Lobbs gave it one tug, and open it flew, disclosing Nathaniel Pipkin standing bolt upright inside, and shaking with apprehension from head to foot.”

“The heroic man actually threw himself into a paralytic attitude, confidently supposed by the two bystanders to have been intended as a posture of self-defence.”

“The Kitchen door opened, and in walker Mr. Job Trotter.”

“I say insolent familiarity, Sir,” said Mr. Pickwick, turning upon Fogg with a fierceness of gesture which caused that person to retreat towards the door with great expedition.”

“Mr. Weller was dispelling all the feverish remains of the previous evening’s conviviality, . . . . when he was attracted by the appearance of a young fellow in mulberry-coloured livery.”

Frontispiece for chapter 1 ‘The Pickwickians’

“Standing before the dressing-g;lass was a middle-aged lady in yellow curl-papers, busily engaged in brushing what ladies call their ‘back hair’.”

“Mr. Tupman looked round. There was the fat boy.”

“Sam looked at the Fat Boy with great astonishment, but without saying a word.”

“Before Mr. Pickwick distinctly knew what was the matter, he was surrounded by the whole body, and kissed by every one of them.”

“Heyling!” said the old man wildly. “My boy, Heyling, my dear boy, look, look!” Gasping for breath, the miserable father pointed to the spot where the young man was struggling for life.

“Sam, having been formally introduced . . . . as the offspring of Mr. Weller, of the Belle Savage, was treated with marked distinction.”

“The horse no sooner beheld Mr. Pickwick advancing with the chaise whip in his hand.”

“Mr. Snodgrass and Mr. Winkle had each performed a compulsory summerset with remarkable agility?.”

“He has come out,” said little Mr. Perker, greatly excited; the more so as their position did not enable them to see what was going forward.